The Walls of Pompeii

I just listened to Pompeii by Bastille on repeat while taking the advice of my 13 yr old for the second time today. Earlier it was sometimes you just need to scream and get it all out – and I did and I felt SO much better afterwards. Now it was to just turn up the music and vibe. So I danced and jumped and generally acted like a fool which I take to mean I was vibing based on my best understanding of the term and I’ll be honest. It felt good. It helped. And now I am finally sitting down to start work to realize I need to get all of this out of my head so that I can let go and move on.

And here I am. On the border of insanity, functioning by the hair of a single thread, if that. So much for starting off today with yoga followed by a productive day of work (since I took a mental health day yesterday in the hopes of avoiding this mess I’ve made). Yet here I am, anyway.

Sometimes it feels like if I close my eyes, it’s like nothing’s changed at all. But in reality the walls keep crumbling down and there’s nothing that it seems I can do to stop it. And not for lack of trying. I’m trying myself to death. The problem is that I am not accomplishing and something’s gotta give. Right now that something is me. 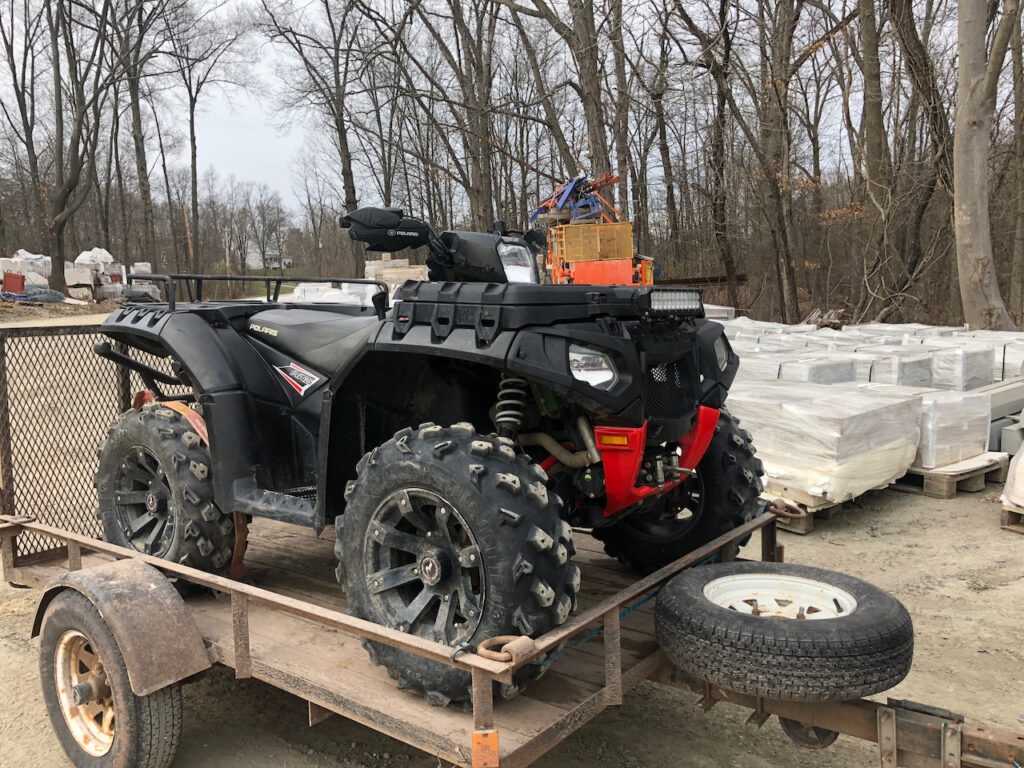 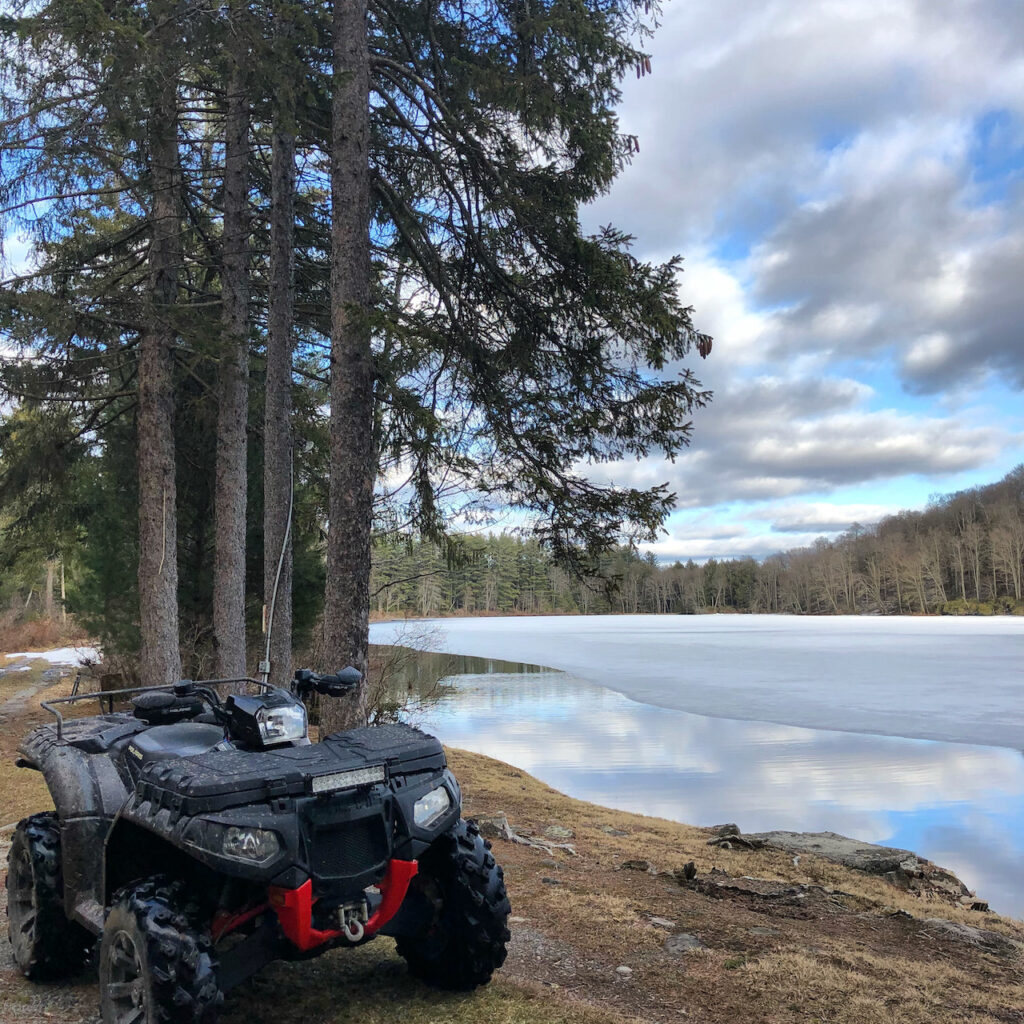 The start of what were to be many great adventures. 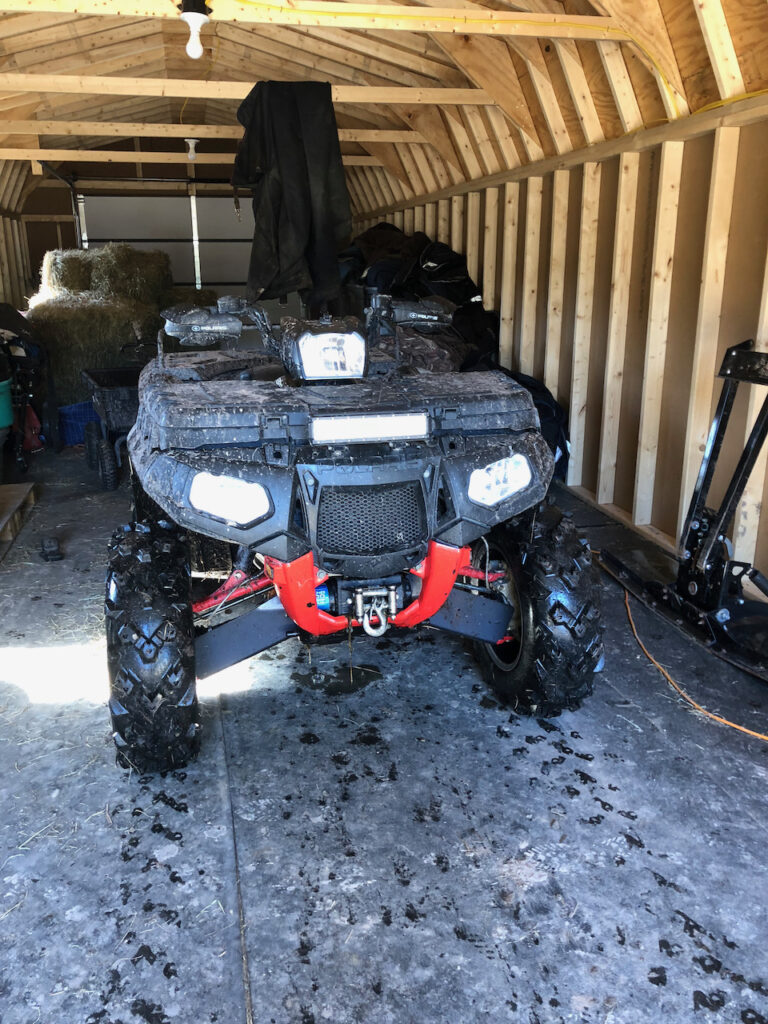 Always washed and cleaned and put away in excellent condition.

I am so disheartened. Deadpool, my quad, is in the shop again. It’s totaled. Again. For something that I saved up for and looked forward to for so long – and then to search and find THE exact limited edition quad I wanted. Not only was it for sale, it was for sale locally. And at a price I could afford, with cash in hand. It was an incredible stroke of luck – and just one of the two times I’ve had any luck with the machine. Cash in hand, I got it. I went to pick it up with my (then) boyfriend in what turned out to be the last time I’d see him before he totally ghosted me. Yup, I didn’t think adults did that either. But I digress. Anyway, Deadpool was perfect. Mint condition, shiny clean, and ran like a dream. Not long after getting Deadpool, we had a forest fire and that quad saved our asses (or woods). The fireman arrived ill equipped to head up the mountainside and their machines kept getting stuck. While they waited for the brush fire unit to arrive, I ran firemen up the mountain on the back of Deadpool to tame the flames. A day later I left for a work trip in Kentucky. Less than a week later I had bronchitis on the border of pneumonia from the smoke inhalation and insane work schedule. But we had limited the fire to some 8 – 12 acres (I think – I can’t remember for sure), when it could have been much worse. Thanks in large part to Deadpool. 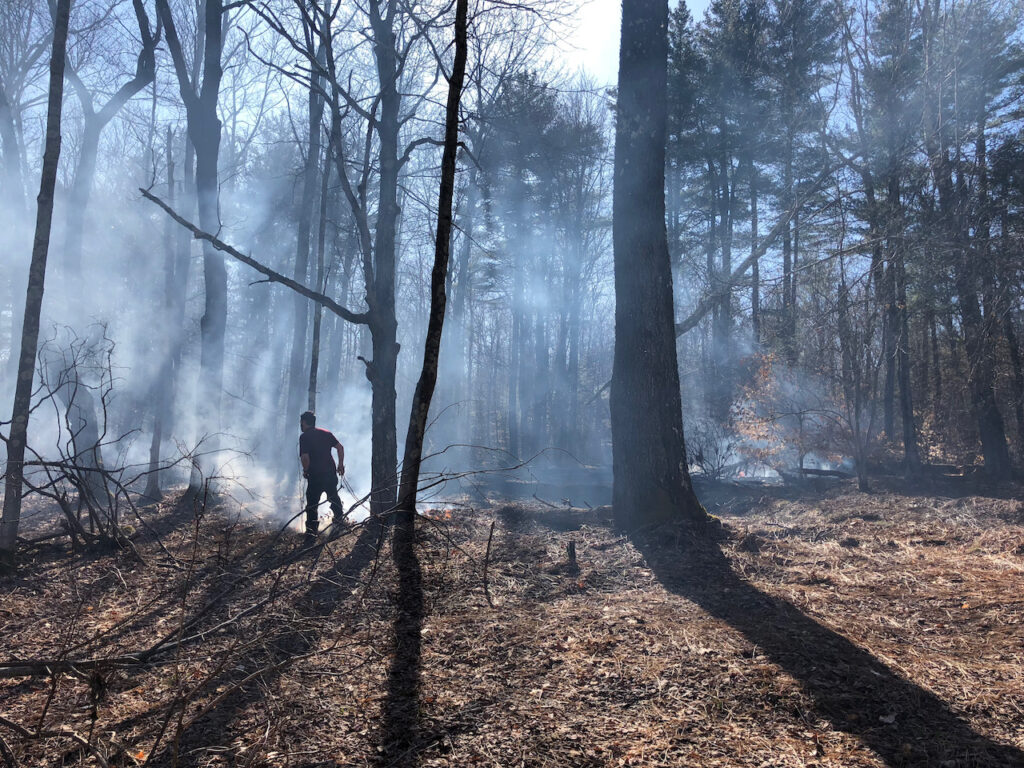 A fire fighter tamping out flames on our mountain.

Since then, my mother has totaled the quad and our searches for a replacement came up empty. The only ones we found were out west, twice as much as I had paid for Deadpool locally without having to transport the machine here, and for the most part, sold before we ever saw the ads. Now the quad is in the shop again – this time from damage from Morgan. It’s totaled again. And there are none like it for sale again. Even fewer old ads even show up this time. It’s a really hard quad to come by which is why I was so excited when I found one for sale near me. 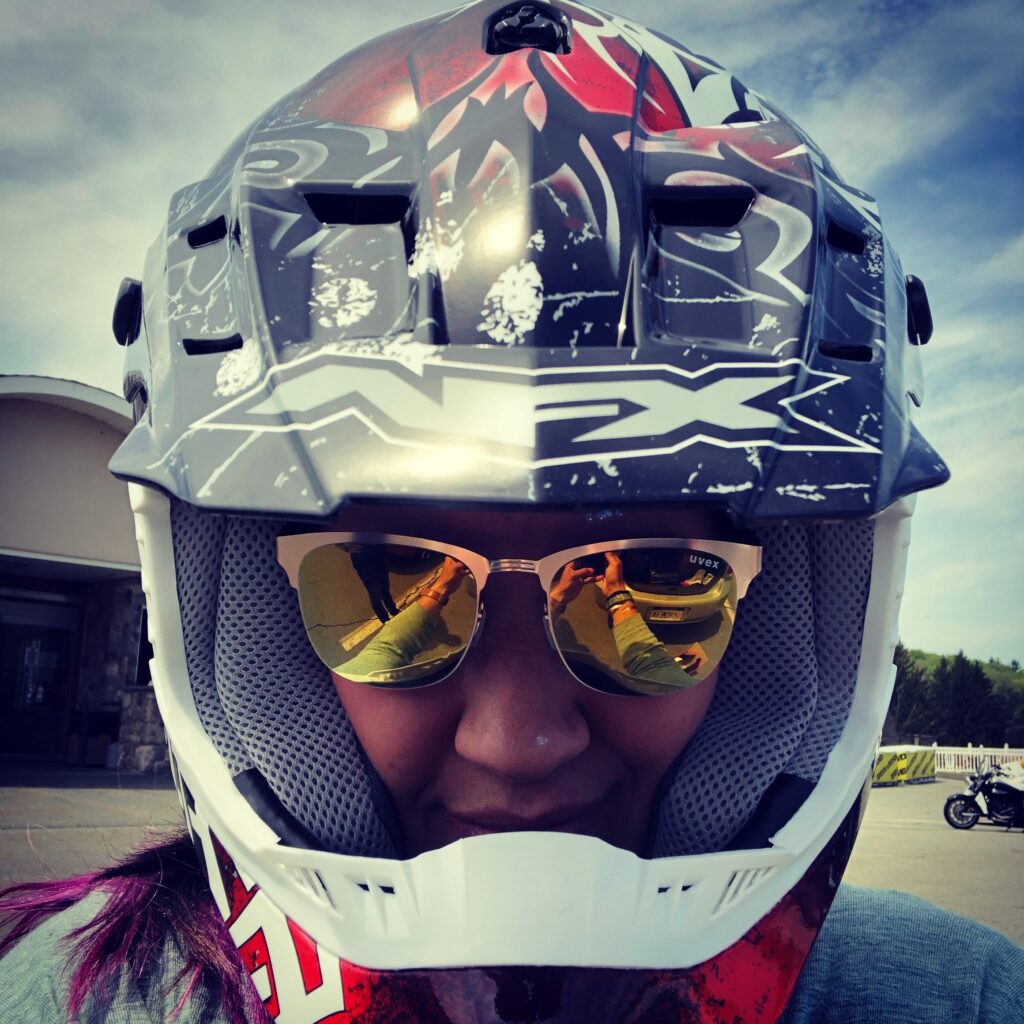 I even special ordered a helmet to match Deadpool specifically. I was so excited.

I bought it for $6,500 cash. It was the most money I had ever spent on myself in my entire life. Sure, I’d had vehicles that were worth more, and even my hot tub and horse trailer. But all of those were financed in some way. I had never bought anything worth this much for myself (or anyone else for that matter) in cash. It cost more than both of the Ford Focuses I owned that I had bought in cash. And it was a lot more exciting! I rode it all the time until the first time it got wrecked. Then I was afraid to take it out as much (even worse – my best friend died in a horrific quad accident that had made me afraid of the machines most of my life until the past few years – this quad was a HUGE accomplishment and gift to myself). So I let the kids use it. Morgan mostly, and his friends. It just went downhill from there. When – if I can even afford it – the work is done this go-round, there will be somewhere around $12k in work put into it. For something I bought for $6,500.

It may not be able to be fixed this time depending on how bad the frame is. I am waiting to hear. And I’ve spend most of the weekend in tears. Not just because it was a quad, or MY quad (as compared to Optimus Prime which was Frankensteined back together and used for mostly just farm chores). But because it was a symbol of my accomplishments that had turned into a reminder of all of my failures. 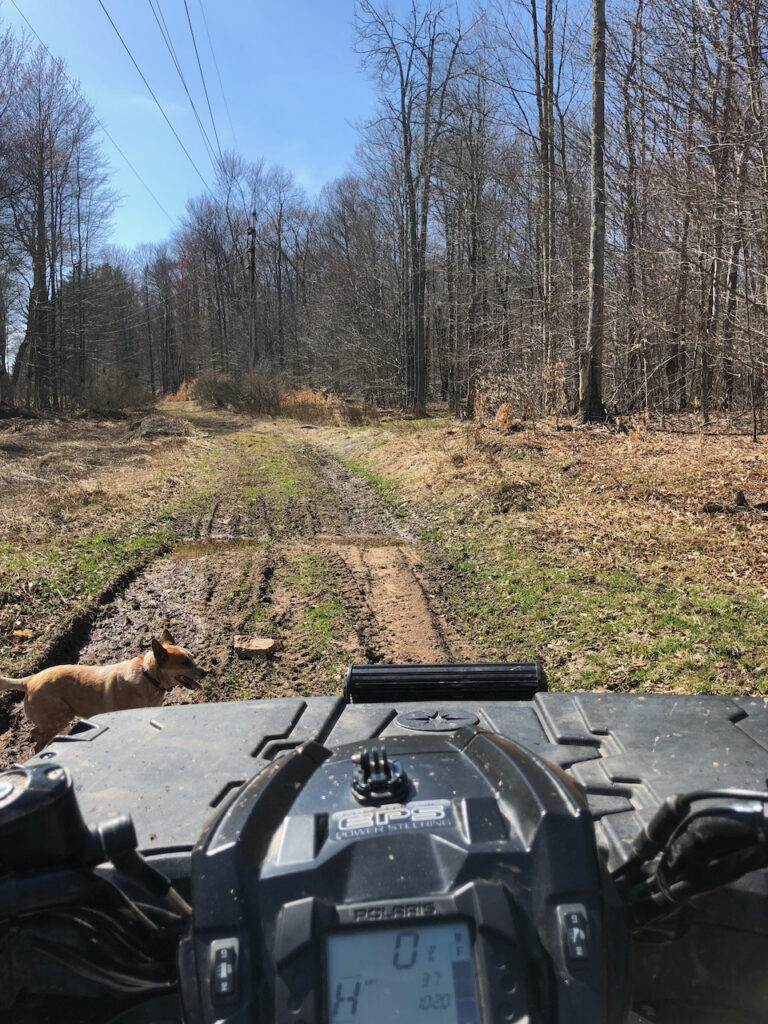 Jack and & I had miles of fun on the trails together in that first year when Deadpool was solely mine and taken care of. 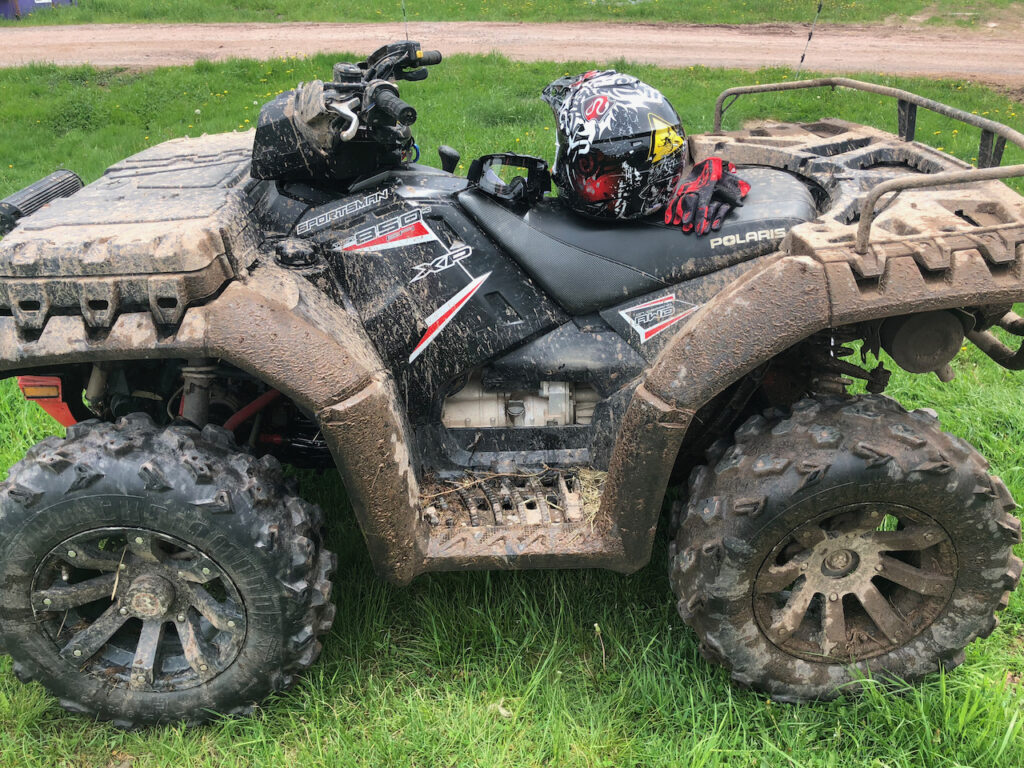 After a successful outing together, before a bath and bed. 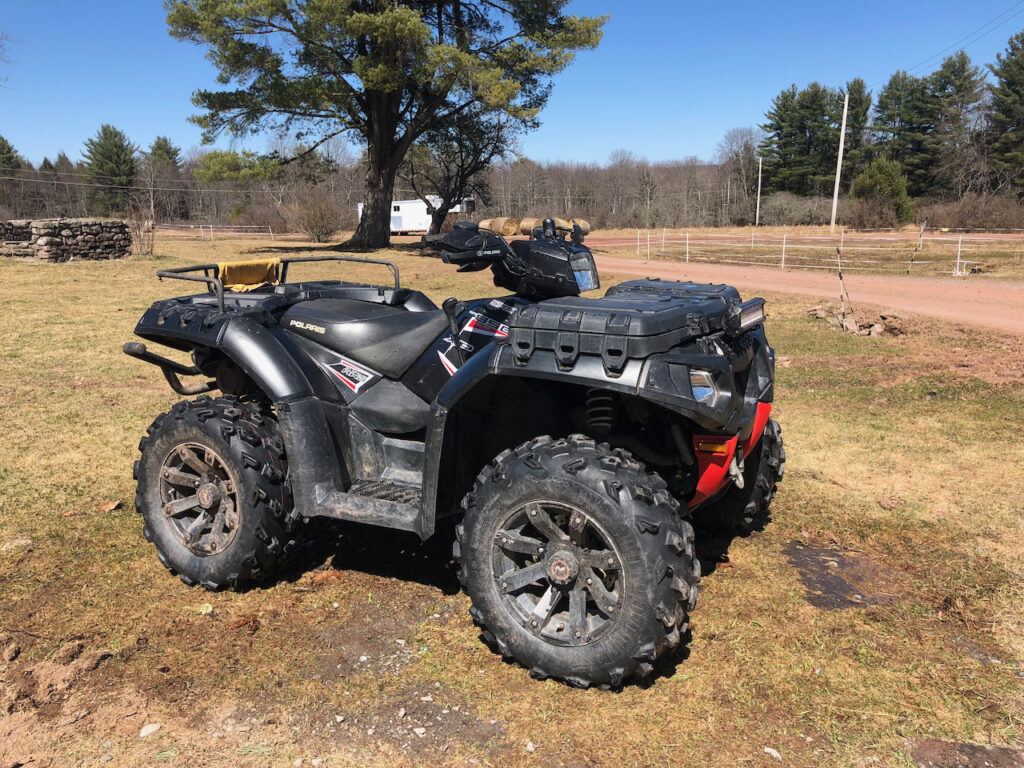 Washed and ready to go to bed, ready for our next adventure another day.

Sometimes when things break, they can be put back together but they aren’t ever quite the same. Sometimes it’s like toothpaste in a tube – you can squeeze it all out rather easily, but saying I am sorry doesn’t get the toothpaste back into the tube, and try as you may, it won’t  ever all go back in the way it was before no matter how sorry you feel or how much you try to fix things.

It’s not about money. Or even material things at all for that matter. It’s about working towards something and recognizing that accomplishment, and being really really proud of yourself to have that dismissed by not one, but two people in your family because “it’s just a machine.” Yes, it is just a machine. But it’s a symbol of so much more. And while I am very very grateful that neither person who wrecked Deadpool was injured in either case, and it definitely could have been much worse, that doesn’t mean it negates how I feel, or the disrespect I feel when my emotions tied to my accomplishment and my treat to myself are dismissed. Again. Twice. By family.

I keep reminding myself of this quote I’ve said a million times before.

“i’ve learned you can’t force negativity to leave you. you must leave it. if it’s still there in your life, it’s only because you have let it be”.

What do you do when you need to navigate around that negativity because it’s not the person’s fault – they’re just doing what they grew up with and the only thing they’ve ever known? We have this amazing therapist working with the family and I adore her. She’s become a lifeline (hopefully not to detriment of herself!) for all of us and is a welcome voice of reason when the voices in my own head can’t be trusted. I know when I am manic – and I’ve definitely been on the “high” side of manic for some time now. Probably a few months where I’ve been in this hyperactive overproductive state trying to get everything done and achieve what to others must seem like unattainable goals that to me just reinforce I MUST be better and I MUST do better.

I’ve been wondering when those cracks were going to show. Or give.

I’m sorry if I scared you. I’m doing my best to remain functional and keep myself out of a mental hospital. I hope you know I’m not joking about how close I am to that right now and I’m not saying it as a threat I just need to make sure that I am functional for all of our sakes. I love you both very much and will figure this out together 💙 We will get there. And I know that I CAN keep myself out of a mental hospital – as long as I remember to say no, or enough, or I need a break. That’s exactly what I did yesterday. And in taking Shell’s advice today, that helped a tremendous amount, too. And also being able to verbalize to myself here as well as out loud to Shell (and I will tell Morgan when I see him too, as he deserves to know why I am so upset out of respect for him), just why it hurts so much also helped a tremendous amount.

And finally, writing it all down here. That was the last piece of this puzzle that I needed to lie down to complete this episode. Hopefully that means I can heal myself from the inside out and begin to move forward again. There is so much to do, I don’t want to miss out. It’s gonna be okay. Better than okay. It just is going to take some time.