Exactly Where I Need To Be

Sometimes when it feels like the world is coming crashing down around me, and everything is falling apart, I just have to stop for a moment and take a deep breath and look around and realize I am exactly where I need to be. Even when it feels like everything is wrong and the world has gone topsy turvy and right side up is upside down and inside out. I just need to remember that I am right here for a reason and I need to have patience. This too shall pass. Nothing in this life is permanent, not even life itself. Nor, for that matter, is death.

There’s a mountain of things piled in front of me to do tomorrow (now today), an ever growing list of bills that are piling up (it’s okay, I am keeping up mostly and what I need help with is  covered by my temporary use of credit that will be paid off before summer is out), an astounding stack of work that makes me feel like I am drowning (I am almost done and will have a few days off in the mountains and next week to work from home and then the beach). Life is fine (it’s actually rather quite good). Sometimes you just need to shift your perspective (it’s all right here) and realize the lesson in front of you, and the steps you need to take to move forward.

I am here now, because it is I where I need to be to get to where I am going. Each step cannot happen before the one before it, and the one before that, and the one before that one. To get to where I am going, I need to be here. And I will still get there. It’s not about WHERE I am getting to, but HOW I live along the way. And nothing is so priceless as taking the time to realize despite all your shortcomings, all your own self doubts, all of your massive imperfections, that you may be someone that someone – or even several someones – look up to. You may be someone’s inspiration. Someone’s hope. Someone’s dream. Or, perhaps you are just the rock they count on and you don’t even realize just how amazing that rock is. But whatever it is, never doubt you are right here because it is exactly where you are meant to be.

I am exactly where I need to be. And so are you. 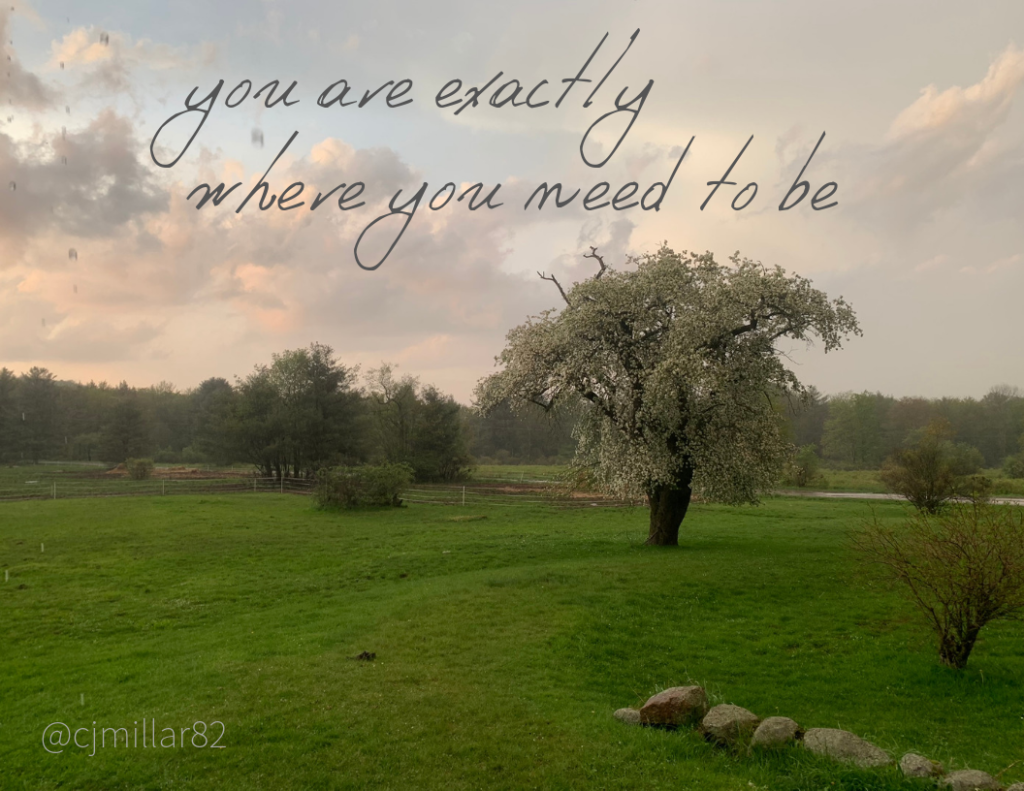 And every single step I took before right here mattered too. Even though my father was in so many ways, awful to me, he also was an inspiration. Not only because he was (is – we’re estranged though he’s still among the living) a brilliant though deeply troubled man, but also because even at his worst to me, those experiences shaped who I am today.

I could either choose to flounder and fail because of what I was told I was and what I was told I would ever become, or I could live to prove him wrong – and I did a million times over. At some point I need to stop proving him wrong and start living for me, and I think that point just happened recently. It stopped becoming about life goals and milestones (those things are still there) but instead became about being a role model and a good example, and living to set more than just a positive example but to also be a ray of light to those around me who may have become lost in their own storms. And as such I started living unapologetically but also unselfishly.

Unapologetic became easy with time. It’s not all that hard as we grow older to stand up and say, “this is me, take it or leave it, like it or not,’ and hold firm in what we believe. It’s the unselfish part that gets a bit tricky. It’s about staring down life changes and wondering – can I really do this? What if I’m not good enough? What if I take on too much and fail? What if I don’t save up enough money or find the right house or lay the groundwork for where I am supposed to be next? But then I stop and realize this IS the groundwork for what is next, and I am already on that path. Doing nothing is still failing but worse because it means I am not really learning anything. So why not try? Why not take a chance? Why not stare change in the face and say, okay – I got this. WE’VE got this.

We do, you know. Got this. All of us together. We’re a tribe. More than the Usual Suspects, some semblance of the remnants of the Lost Souls Society of my youth, and something else entirely. I don’t know what we’re called, but we’re that thing whatever it is, and it makes me happy to know that. Even if we haven’t yet found a name.

Just know that you belong. I belong. We all belong. And there will always be a place in life for all of us. It may not always be where we expect, but it will always be exactly where we need to be.