The Guise of Well-Meaning

We’ve all heard that line before. Oh, she means well. They have the best intentions. He’s only trying to help. No harm meant. They’re just offering a hand, advice, etc. It’s okay, she means well. You have to understand where they’re coming from…and on and on it goes.

Right through to the part where you’re talked over, interrupted, and dismissed because they’re family. They mean well. They didn’t MEAN to intrude, hurt your feelings, or be dismissive. That response of, “oh, well I don’t know,” was just a statement, not an insult. Except it WAS an insult. It is a completely rude, dismissive statement that says at the conclusion of listening to you and your (presumably educated) statement/opinion/thought that the listener has totally and completely disregarded and dismissed everything you said because it didn’t resonate with them so therefore, they don’t know, and they don’t value your opinion. It’s a psychological tactic that allows the listener to allay their insecurities and dismiss your thoughts in favor of their own. It’s a cop out, and a means to show that while they don’t know (and they very well may not), they also do not value what you DO know and just said. It’s rude. And I am over it.

Some people listen to learn and understand and comprehend. Some people listen only to formulate their own thoughts and respond. I grew up in a household where I started out and was initially surrounded by the latter. Over time, and through the alienation of myself from my family – especially my siblings whom I value more than most people on this planet – I learned that was unacceptable. When people speak, we are to listen to absorb. Hear. Comprehend. And understand. Not to respond or add your own two cents in. Sure, sometimes a response is warranted, wanted even. But not always. Sometimes, all the other person needs is to be heard. 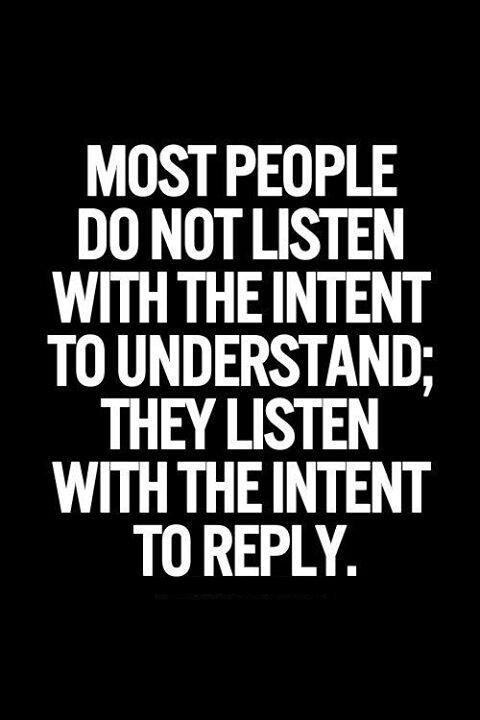 I have no desire to continue to be around people who only listen to respond, add in their own two cents, or reply with, “I don’t know.”

If you’re in that category – you’ve been warned. If I don’t take your calls, now you know why. I am done being treated with continual distrust and disrespect. I carry enough weight on my shoulders. Time for you to carry your own.

“She means well, but…” is an excuse I will no longer make nor accept. Not for anyone. Not for myself, not for friends, and not for family. If you truly mean well, think through your actions, and then act on that well meaning with conscious thought and empathy. Not excuses. My father hated excuses. I learned that from him and I couldn’t agree more – at least in that area with him. Just be honest and straightforward, and that starts with being honest with yourself. It’s not saying well I thought, or I did this because, or my intention was…it’s being honest from beginning to end. I am so sick of saying / hearing / explaining “underneath it all, they mean well,” or “underneath it all, they have the best intentions,” or “if you really knew him / her / them you’d understand.” How about understanding through authenticity of one’s actions and expressions rather than making excuses? Food for thought. 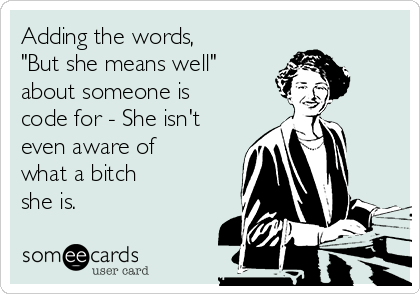