An Open Letter to the Guy Who Left

I didn’t think things would go this way. I’ve never trusted someone so quickly, or let someone ever convince me not to run – to only run away themselves. I thought we were better than that, or if nothing else, we were older than that. I mean at 41, what did you expect? Would you really have been happier if I needed you as opposed to being self sufficient? We’re not kids, anymore.

Let me make a few things clear. Yes, I make decent money. I’m not rich, but I’m not poor, and I am blessed enough to not have to stress (for the most part) about what I can and can’t afford. I still need to budget, and while there are times I can get lucky and a $$ new-to-me four wheeler comes easy, there’s plenty of times that things are tight and this, that, and the other thing needs to be repaired on the farm. It is what it is. But mostly, it’s a good thing that heading into the fourth decade on this earth, I can afford the lifestyle in which I like to live.

I manage my farm myself. I can buy my own toys, pay my own billls, and for the most part, live how I like. There were plenty of things you did better than me. Drive a tractor for one (and I don’t readily admit that!). And there were a lot of things you were really good at.

You were good to me, too. You taught me so much, even if you didn’t mean to. You see, because before I met you, I was afraid to date. I said it was because I was too independent, but a lot of it had to do with my own fears too. It had to do with my fear of failure. Of not being good enough. Again. Of not being enough, or being too much, or something mediocre in between. You taught me I was good enough, or perhaps, even too good. You told me I was beautiful – and I believed you. You told me I was amazing – and I believed you then, too. And you told me not to run – and I’m still right here.

But then you ran. You ghosted me, the same way you ghosted my best friend and told me it was because you were really into me and not her. Only you told me you loved me – and I believed you then, too. But you still left. You didn’t tell me why. You didn’t even answer. You went from telling me you loved me to disappearing in my busiest, hardest month of the whole year – which you knew from the day you met me – and you left anyway. I had a forest fire, bronchitis, wound up needing X-rays in the hospital. I traveled on two major business trips and worked through so much. And I still put effort into you.

But you ran anyway. But it’s okay. Because you know why? Because I did believe you and while I learned you couldn’t be trusted, I also learned that I would have never have known that if I didn’t take a chance. I learned that I am beautiful. I learned I am amazing. You told me so, but I am starting to see it too, thank you. I also learned that even if I was too much for you, there was probably someone out there somewhere that I am not, nor ever will I be, too much for. And I would have never believed that if I didn’t meet you.

Never before have I taken such a huge chance, such a big leap of faith that two months in and I would learn more than I had so far in a lifetime. But I did, and I learned, and somehow weeks later, I just can’t stop smiling.

Thank you for loving me enough to help me see how amazing things are when you are willing to share your life with someone. And thank you for running rather than staying and leaving after years more of me falling for you. And most of all, thank you for showing me that every chance is worth taking, and worth so much more than regret. While I wish/thought it was you I’d be sitting here with, listening to the peepers while watching the stars shift slowly across the horizon around the big pine tree is pretty damn perfect. You’re a good person; I just wish you were a better man.

Thank you, for showing me I am worth it. For reminding me I am beautiful and amazing. And teaching me that I do deserve to share my life with someone who loves me as much as I love them, even if I haven’t met them yet. 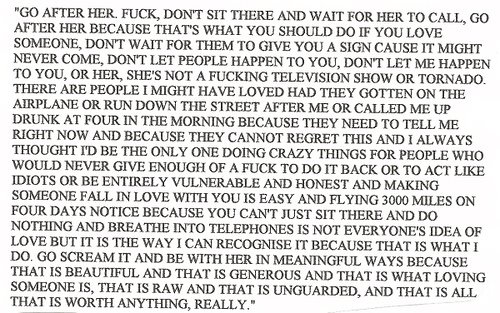