Red Velvet, If You Please

I really wish I had a boyfriend. Mostly because I want someone to bring me something red velvet right now because I’ve had a rough weekend so far and red velvet makes everything better. And wine. But I already have wine. Please don’t think for a moment that I need a man to bring me wine, ha!

But red velvet something would be nice right now. Only with vanilla icing, not cream cheese icing. I never understood why red velvet and carrot cake always comes with cream cheese icing. That shit is gross! Vanilla please! And I know I’m right because my brother agrees with me and he’s right pretty much about everything so therefore I win.

In other news, I have a selfie with the top ranked eventing rider in the world. And there’s a flying squirrel in my freezer. #truestory #sorrynotsorry

Yes, I realize these two items are not necessarily related. Nor is the want for red velvet with vanilla icing. But I have red wine by Dave Matthews called Crush, and it’s amazing, far better than his song. That should be a given, of course, since it’s wine and wine is amazing.

I may also be punchy from very little sleep because for the past few days I’ve been dealing with two sick cats and a sick horse. Anyone who says that owning animals is way easier than owning children has never checked on a colicky horse every hour around the clock for 2+ days straight while cleaning up cat vomit at regular intervals between treks to the paddock.

Have I mentioned there’s a flying squirrel in my freezer? No need to call the SPCA, he was already dead when I put him there, though he looked pretty alive when I took his picture. I assure you he was long dead, and just somehow managed to rigor mortis as if he was mid-flight, which I gather is how he died because he wasn’t a very good flying squirrel and missed his mark. Or perhaps he had a heart attack mid-flight and that’s why he missed his mark. Either way he was dead when I found him, remained dead for this photo shoot, and is presently chillin (pun intended) in my freezer to see if he’d be a good addition to The Bloggess’s collection (if you don’t know who she is, you are seriously missing out. Google her – or just go read her blog TheBloggess.com. NOW!).

I guess it’s good I don’t have a boyfriend. I’m trying to lose weight anyway and red velvet would totally get in the way of that. Even if it did taste like heaven. But then I’d get annoyed with my boyfriend because he got cream cheese icing and doesn’t he already know that I hate cream cheese icing? See? This is why I am single. And independent. And celebrating Independence Day. Well that and because of our troops and those who have served and saved us and given us the freedoms we have, like the freedom to have a selfie with the top rider in the world and keep a dead flying squirrel in your freezer. Beat that, Europe! 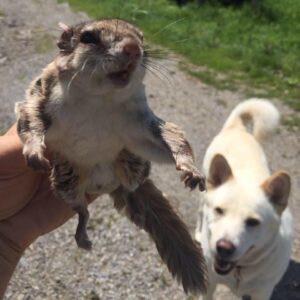 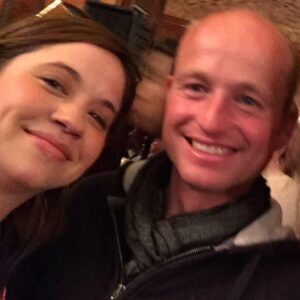 See? It’s all true! (I PROMISE you he was dead in that photo! No no, not Michael Jung the event rider, the flying squirrel. I also promise you that Michael Jung is very much alive, and kicking everyone’s asses around the world at eventing.)